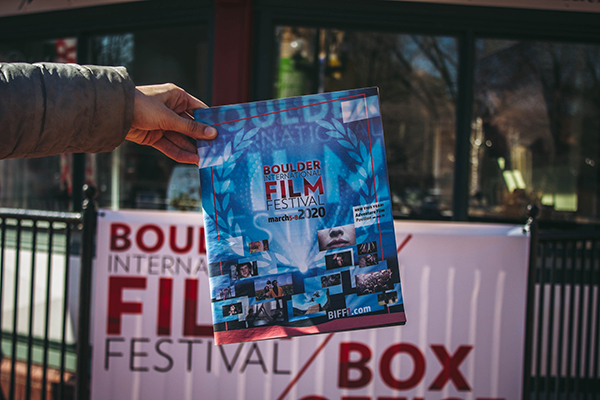 Tomorrow is the opening day for the annual Boulder International Film Festival (happening all weekend downtown)! Over half of this year’s films are about and/or made by women which is awesome for many reasons, but particularly because March is Women’s History Month and March 8th, the closing day of the festival, is International Women’s Day! Being a woman filmmaker myself, seeing this kind of representation is both exciting and inspiring. There are all sorts of exciting things to see and do at this year’s festival including the XR Pavilion, Youth Pavilion, all new Adventure Pavilion, parties, TalkBacks and more! Since film is one of my areas of interests, let me give you a day-by-day of what I’m most excited for:

Thursday is the first day of the festival. There will be two films screening in addition to the XR Pavilion kick-off party and the CineChef special event. Since I love live music, I’m looking forward to the Singer-Songwriter Showcase Thursday evening from 7pm to 10pm at The Post.

Friday is when things really kick off at BIFF! There are too many films to list, so make sure to check out the schedule! Here’s what’s on my radar: Toxic Beauty directed by Phyllis Ellis is screening at 10 am at First Presbyterian Church with a TalkBack following the film; Piano to Zanskar, Grand Prize winner at the Banff Mountain Film Festival, directed by Michael Sulima, produced by Jarek Kotomski (both Sulima and Kotomski will be there in person) and featuring an original musical score by Werner Herzog collaborator Ernst Reijseger is screening at 5:30 pm at First Presbyterian Church.

The Friday Opening Night Red Carpet Gala and Film tickets are limited, but is included in the BIFF pass. The film, screening at 7:30 pm at Boulder Theater, is Once Were Brothers: Robbie Robertson and the Band directed by Daniel Roher, distributed by Magnolia Pictures and has Martin Scorsese, Brian Glazer and Ron Howard as executive producers. Needless to say, it’s going to be a good one!

Saturday is a full day for BIFF! Across six venues there will be 29 films screening along with various TalkBacks, workshops, parties and more! Here is what I’m looking forward to the most: Resistance directed by Jonathan Jakubowicz, starring Jessie Eisenberg (who will be there and doing a Q&A following the film) and presented by IFC Films is screening at 7 pm at Boulder Theater (advanced tickets are no longer available, but a festival pass guaranteed entrance); Imitating Life: The Audacity of Suzanne Heintz directed by Karen Whitehead is screening at 5:15 pm at First United Methodist Church with both Whitehead and Heintz being there in person. I will also be checking out the XR Pavillion, open from 10 am to 8 pm, which includes VR films from around the world (I’m particularly looking forward to the two Disney films being shown), interactive workshops, The Boulder XR Science Fair and more!

Sunday, as I mentioned, is International Women’s Day! Celebrate by attending the Women’s Adventure Short Films and Talks in the Adventure Pavilion in the afternoon. Other than that, here’s what interests me: Superpower Dogs directed by Daniel Ferguson is screening at 12:15 pm at Boulder High School; Corpus Christi directed by Jan Komasa and nominated for a 2020 Academy Award is screening at 3 pm at Boulder Theater.

Sunday is also the Closing Night Awards & Film. The closing film, screening at 7:30 pm at Boulder Theater, is The Social Dilemma directed by Boulder’s own Jeff Orlowski who is known for his films’ Chasing Ice and Chasing Coral. Following the film there will be a Q&A with Orlowski, producer Larissa Rhodes and other team members.

Boulder International Film Festival is still looking for volunteers! If you’re interested in helping with this super cool and exciting event and see films for free, checkout the volunteering opportunities!

Hope to see you there!