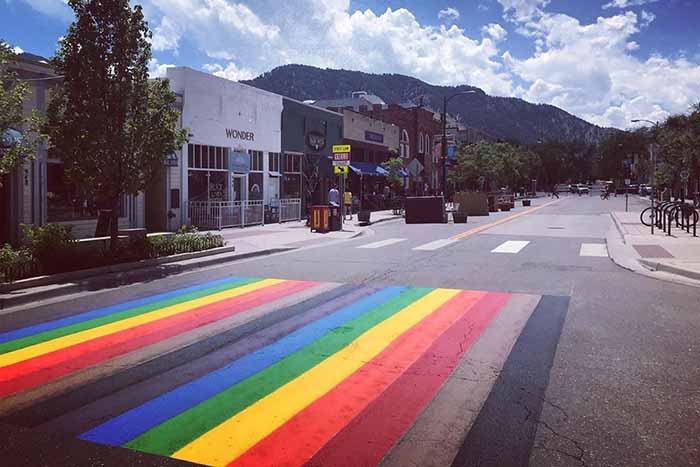 As you may or may not be aware, June is Pride Month! Pride Month is held every June to commemorate the Stonewall Riots that took place in June 1969 and paved the way for LGBTQ+ people and LGBTQ+ rights. As we are already three weeks into Pride Month, I wanted to share with you all some of the ways downtown Boulder is celebrating.

Have you spotted the rainbow flags posted around the Pearl Street Mall? These flags are handed out to downtown businesses each year by Out Boulder County as part of the project Rainbows Over Pearl. The goal of this project is to show how the Boulder community welcomes those who identify as LGBTQ+ and to show solidarity with them. If you take a stroll around downtown Boulder during the month of June, you’ll be sure to see many of them flapping in the summer breeze!

In addition to the rainbow flags around the Mall, the crosswalk at Broadway and another on the West End at 10th and Pearl are painted rainbow. The six colors of the rainbow portray a specific sector of the LGBT community and queer spectrum. In 2017, two new colors were added to the classic rainbow to represent LGBTQ people of color. The black and brown stripes represent diversity and inclusivity, respectively.

If you’re still searching for some Pride-friendly activities on the Pearl Street Mall, head over to Ben and Jerry’s for a rainbow waffle cone! Ben and Jerry’s has always been a big supporter of social movements and change, and we’re lucky to have this inclusive company in the heart of downtown. When you’re walking over you’ll probably see the rainbow crosswalk at Broadway. Make sure to snap a pic of your rainbow waffle cone with the rainbow street in the background for an extra Prideful picture!